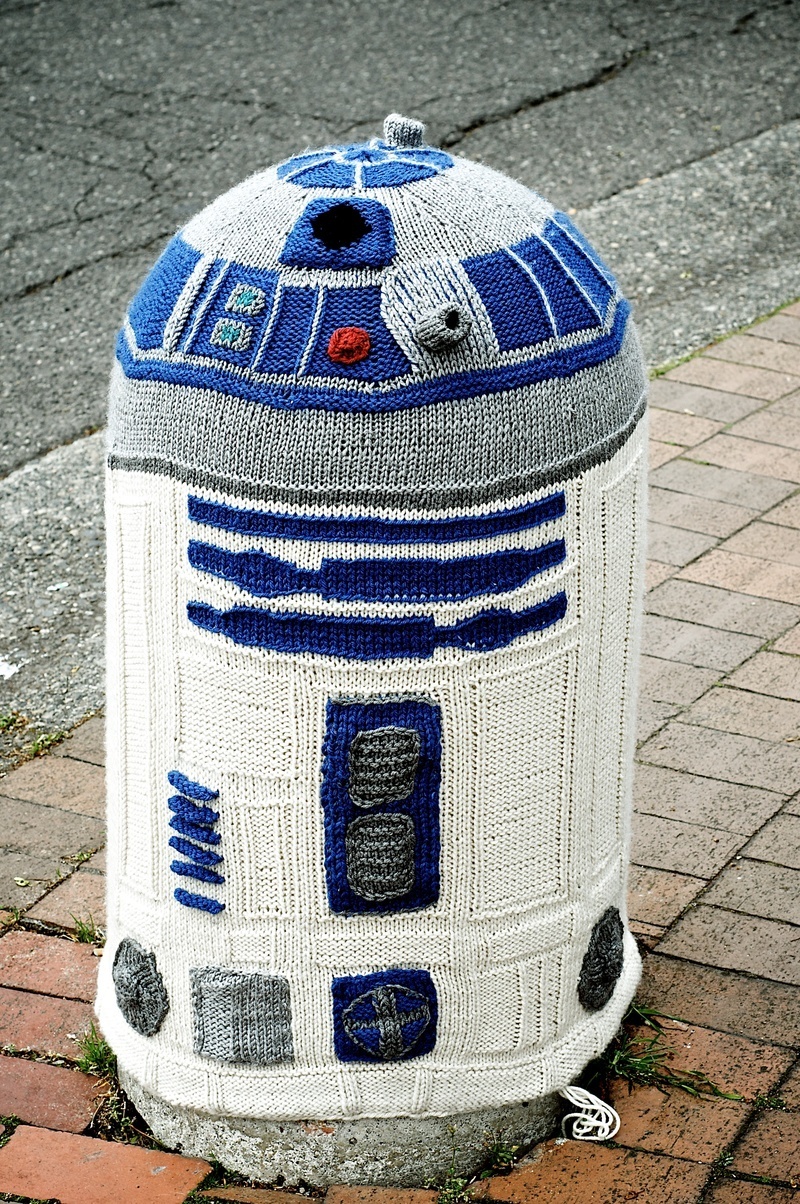 -> See the whole album on GooglePlus.

In case you missed it, yesterday was the second annual International Yarn Bombing Day, where knitters, crocheters, and other needlecrafters set out all over the world to decorate a public space. Yarn bombing is a relatively new form of street art, but it's becoming more common in larger urban areas. One of my favorite yarn bombs is the neon-colored crocheted Wall Street Charging Bull by Agata Olek on Christmas Eve, 2010. Since then, yarn bombing has been featured in articles on Forbes.com, the NYTimes.com, Reuters, and the Today Show Blog, largely on the part of people like Leanne Praine (@LeannePraine), co-author of the bestselling Yarn Bombing: The Art of Crochet and Knit Graffiti and Hoopla: The Art of Unexpected Embroidery.

So I set out in March of this year in the shadow of many talented knitters and crocheters, determined to yarn-bomb a lackluster part of downtown Bellingham, Washington. The pedestrian crosswalks here have concrete structures lining the paths. They're about hip-height, squatty, and ugly; and I was in the middle of a rant about how boring they where when I realized they were about the same shape as a well-known robot from the popular Star Wars films.

On March 16, 2012, I "cast on" my very own knitted R2D2 slipcover. There are plenty of R2D2 hat and toy patterns on Ravelry.com (@ravelry), a great pattern site for knitting and crochet, but nothing was near this scale. (For any who would like to recreate this project, I'm happy to share the makeshift pattern you see on my iPad in the Instagram photos below.) Basically, I had to create a tube 56" around, 23" high, and then curve into a dome over about 14". It was a tricky bit of math, but nothing harder than freshman geometry. I ended up using just about 1200 yards of yarn. 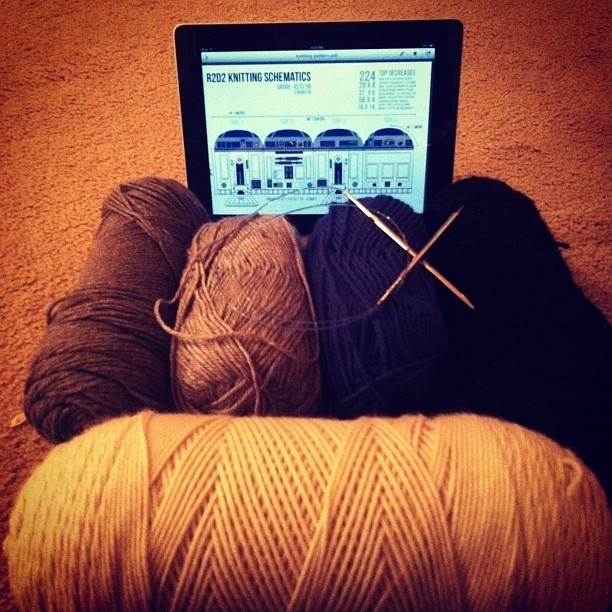 I had it nearly finished on Friday, June 8th, and set it up outside my office, where I work downtown. Some coworkers and friends visited to see if I really had finished it. A few of them even posted photos on their Twitter accounts. I didn't even realize until the next day that Leanne Praine, the author I mentioned above, had picked up on those tweets and was demanding, "Who made this? Own up, because i want to know who you are and personally acknowledge your awesomeness."

I had some small tweaks to finish before the actual event on the ninth, so I took R2D2 back home to add the large eye and a drawstring around the bottom to keep it from rolling up along the bottom. Around 10am Saturday morning, I finally made it down to the Bellingham Farmers Market, where I figured there would be enough foot traffic to notice the strangely-adorned concrete pillar.

After I fitted him over one of the structures, I sat at a nearby coffeeshop and shot some photos of passers-by while my husband (@MattRudder) tweeted about the occasion.

I did not expect the incredible support I received from other knitters, crocheters, and even people who likely never heard of yarn bombing before. Somehow, R2D2 made its way back into the feed of Leanne Praine, who tweeted to my husband, "This might be one of my favourite yarn bombs ever! Kudos to your wife!" and told her followers, "Yarn bombers, give @sknep a digital high five for making the knit R2 D2!"

Other Twitter and Instagram users started sharing it, and this morning, my husband showed me a photo of R2D2 on Reddit. Then it showed up on Neatorama's Facebook page. I never would have expected such an overwhelmingly positive reaction. Thanks, all of you!

Some of the Reddit readers voiced their concerns about the longevity of a yarnbomb like this. To answer those questions, I actually didn't leave the yarnbomb on the pylon overnight. I removed R2D2 when I left, and plan to add "legs" and hide speakers in it for next year. Even if I had left it out to weather the elements, R2D2 is made out of an acrylic yarn that wouldn't bleed, fade, or stretch for quite some time. It just happens to be graduation weekend and this is a college town, and I have grown attached enough to this project to not want it's 'lifespan' cut short unnecessarily.